Medical Polo and Food Packaging, on Sole24ore the investments of the Raccioppoli Group

Home/News Events/Medical Polo and Food Packaging, on Sole24ore the investments of the Raccioppoli Group
Previous Next

Medical Polo and Food Packaging, on Sole24ore the investments of the Raccioppoli Group

The courage and vision of CEO Domenico Raccioppoli continue to attract the attention of the national media.

On Sole24ore, in an article by journalist Vera Viola, spotlight on our investments and the brilliant results achieved in recent months, despite the serious crisis that grips the international economy.

Our medical center and our food packaging are now a flagship for the production system of Southern Italy.

The Company, Nuova Erreplast, located in the industrial area of Marcianise, Caserta, has started a significant industrial conversion: in the beginning of the November, the Company will have a ribbon cutting ceremony to introduce the new plant, which will be used for the production of the meltblown material, a filtering material necessary for the production of all personal protective equipment. So far, the material has been produced only in small quantities in Italy, and has not been produced in the Mezzogiorno area, which means that the majority of meltblown is necessarily imported from China.
The $5 million investment has started during the lockdown when there was a strong demand of masks compared to the usual limited offer.
The Raccioppoli Group, already present in Marcianise, along with a second Company who specializes in the production of packaging for the food and non-food industry as well as the fashion and clothing industry, decided to respond to the COVID-19 and convert part of the plant’s production to supply the strong demand of PPE-Personal Protection Equipment. Since June 2020, Nuova Erreplast has started the production of chirurgical masks and the FFP2 masks a little while after. In the first three months, Nuova Erreplast has reached the production of 5 million masks distributed in Italy. However, not content with the first experience, Nuova Erreplast’s top management decided to make a step forward by acquiring new technologies avoiding to import the meltblown filter material from China and producing it at home, for the market as well. According to Domenico Raccioppoli, CEO of Nuova Erreplast, We have purchased a Made in Italy extruder, built in the province of Varese, whose company produces and mostly exports their extruders. With the installation and consequent start-up of the new production lines, we will be the first raw material producers of PPE-Personal Protection Equipment in the Mezzogiorno area and among the few producers in Italy. This will allow us to produce material capable to make 1.8 million masks per day and to expand the reference markets.”
This investment also allows them to produce protective medical clothing, such as gowns, headphones, shoe covers, sheets, covers for greenhouse systems, diapers and absorbents, breathable membranes. In short, in a few months, while the crisis has brought the economy to its knees, hitting the industrial (fabric) network of the Mezzogiorno area hard, Raccioppoli has implemented a deep conversion and industrial transformation instead, allowing them to succeed in resisting the crisis and increase in growth. In 2019, Raccioppoli achieved a revenue of roughly 27 million, and in June 2020, they have achieved an increase of 10% compared to the previous year, which even strengthened with +15% at the end of September. This goal was mainly achieved thanks to the flexibility of the small Italian companies, but also thanks to the product innovations. One of the main innovation approaches will take place in the clear room where both the launch of the new extrudor and the entire production will be carried out.
Today Nuova Erreplast has a staff of about 80 employees and are shortly preparing to hire ten more people. The Raccioppoli Group is made up of four companies that cover the entire supply chain and will produce raw material to their finished goods and handle packaging, logistic and delivery.
Furthermore, another important investment has been made in the “historic” area, dedicated to food packaging: in this case, a new plant has been purchased and installed with a commitment of 2.5 million, which will allow a significant increase in the film’s production, reaching the total production capacity of 18 million linear meters printed per month. © 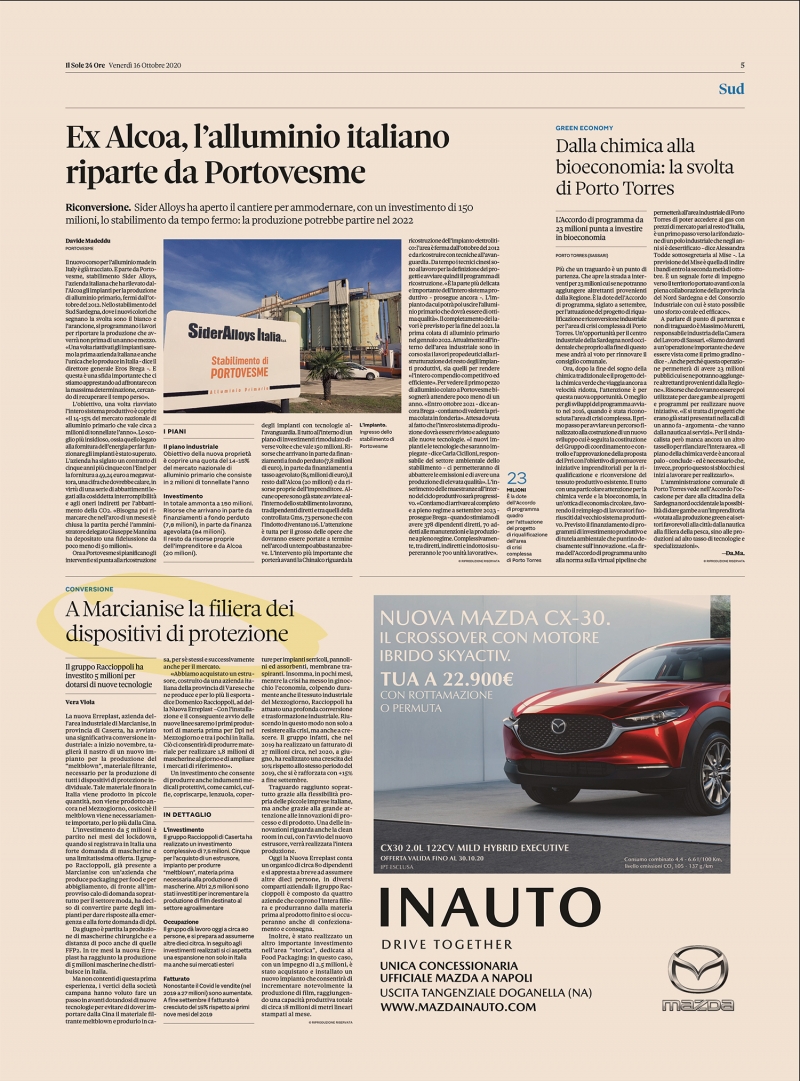 Questo sito utilizza i cookie per migliorare la tua esperienza durante la navigazione attraverso il sito. Di questi, i cookie che sono classificati come necessari vengono memorizzati sul vostro browser in quanto sono essenziali per il funzionamento delle funzionalità di base del sito web. Utilizziamo anche cookie di terze parti che ci aiutano ad analizzare e capire come utilizzi questo sito web. Questi cookie saranno memorizzati nel tuo browser solo con il tuo consenso. Hai anche la possibilità di disattivare questi cookie. Ma l'esclusione da alcuni di questi cookie può influenzare la tua esperienza di navigazione.
---
This website uses cookies to improve your experience while you navigate through the website. Out of these, the cookies that are categorized as necessary are stored on your browser as they are essential for the working of basic functionalities of the website. We also use third-party cookies that help us analyze and understand how you use this website. These cookies will be stored in your browser only with your consent. You also have the option to opt-out of these cookies. But opting out of some of these cookies may affect your browsing experience.
Advertisement
Advertisement cookies are used to provide visitors with relevant ads and marketing campaigns. These cookies track visitors across websites and collect information to provide customized ads.
Analytics cookie
Analytical cookies are used to understand how visitors interact with the website. These cookies help provide information on metrics the number of visitors, bounce rate, traffic source, etc.
Functional
Functional cookies help to perform certain functionalities like sharing the content of the website on social media platforms, collect feedbacks, and other third-party features.
Necessary
Necessary cookies are absolutely essential for the website to function properly. These cookies ensure basic functionalities and security features of the website, anonymously.
Others
Other uncategorized cookies are those that are being analyzed and have not been classified into a category as yet.
Performance cookie
Performance cookies are used to understand and analyze the key performance indexes of the website which helps in delivering a better user experience for the visitors.
SAVE & ACCEPT
Powered by